The power of hypnosis is becoming more and more evident within the science community. Hypnotherapists have known hypnosis can changes your brain for a long time,  we now have the evidence to back it up. Change is easy as long as you follow the pattern for changing brain pathways. As the author John. B. Arden in his book ‘Rewire the Brain’ explains, the method of rewiring our brain involves four steps. I would apply the following steps if you want to change, with conscious thinking and/or while in hypnotic trance. They are:

FOCUS: On paying attention to the situation, the new behaviour, or the memory that you want to repeat or remember. This can be consciously or practiced in Self Hypnosis.

WORK: On shifting your attention from perception to action. Making a focused effort activates your brain to establish new synaptic connections.

EASE: After a new behavior, thought, or feeling has been established, it takes less energy to keep it going.

Motivation and a willingness to do the work, is also a very important component of neuroplasticity. You cannot change unless you really want to change. A passive effort just won’t work.

It’s like learning to drive, at the start we are all peddles and mirrors, constantly checking every move that we make. After consistent practice with conscious effort, the subconscious mind learns how to drive and it then becomes automatic for you.

Repetition rewires the brain and breeds new habits “Cells that fire together, wire together.”

“The idea that we can train our brains to work better is all the rage across society, but our research suggests that the human brain may benefit as much, or even more, from imagining performing a task, than the brain does from practicing a task over and over,” says psychological scientist and study author Geoffrey Woodman of Vanderbilt University.

Not only does behaviour change the structure of the brain through neuroplasticity; just thinking about or imagining particular behaviours can change brain structure as well. Mental practice alone contributes to the wiring of the brain. Every time we think a specific thought, a specific pathway of neurons fires up, neurotransmitters are released and synapses are subtly altered. With repetition, this pathway is strengthened.

Your brain can not tell the difference between what you experience and what you imagine. Volunteers were asked to play a simple sequence of piano notes each day for five consecutive days. Their brains were scanned each day in the region connected to the finger muscles. Another set of volunteers were asked to imagine playing the notes instead, also having their brains scanned each day. 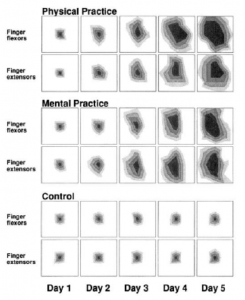 You can clearly see that the changes in the brain in those who imaged playing piano are the same as in those who actually played piano. Really, your brain doesn’t distinguish real from imaginary!

So if you want to make a change in your life, use your imagination to see, feel and sense the change in the now. This will start the brain firing and create the new neural pathway. Consistent repetition is now the key, practice your visualisations a couple of times a day or listen to a hypnosis audio. Whatever you apply visualisation to, you have more of an ability to shape your brain circuits and the physiology and health of your body than most people think.